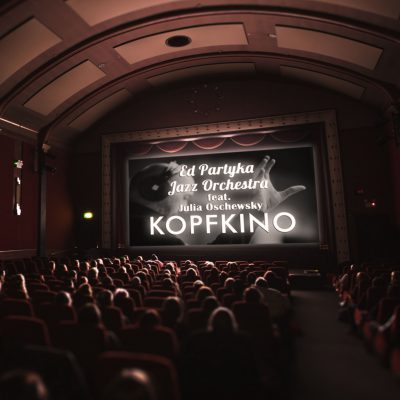 The Ed Partyka Jazz Orchestra (EPJO) was launched in Berlin in 2007. Its trademark is an unmistakable, and in all likelihood globally unique, mix of musical personalities. “Old stars” from the European big band establishment play side by side with newcomers from the young and hip jazz scenes of Berlin, Amsterdam, Vienna and Prague. Musicians from the USA, Germany, Austria, Holland, Switzerland and the Czech Republic get together – each of them brings their own musical language, and adds their unique national sound into the mix.

As on their previous CD Hits! Vol.1 (MONS Records), the singer and composer Julia Oschewsky plays a prominent role on the current album Kopfkino. “Her voice adds a clarity and intensity that had been lacking in the sound of the orchestra so far” enthused Ed Partyka, “and it definitely colours my arrangements in a very special way.”

“Kopfkino” – it means fantasies, and the sequences of events and occurrences that play out in your own imagination.
Ed Partyka purposely chose this title for the new album by the Ed Partyka Jazz Orchestra, and he uses the concept as a synonym for his composition (The Summer Of My Discontent (Summer In My Disco Tent)) and arrangements.
Composers such as Wayne Shorter (Fee Fi Fo Fum), Harold Arlen (Out Of This World), Ola Onabule (It’s The Peace That Deafens), Julia Oschewsky (One Two Three Ten) and Joris Roelofs (Ataraxia) all have their say; Ed Partyka puts his stamp on their work with his unmistakeable arrangements and inimitable musical ingenuity.

“This music invites you to (day) dream. The dense texture of the orchestration, the melodically improvised solos, and the bright-sounding voice of Julia Oschewsky fire up the imagination. A feeling of sad beauty infuses the music and the whole power of the orchestra is revealed in my dramatic arrangements” said the artist. According to Ed Partyka, every big band has its own language. Judging Kopfkino on those terms, the composer and arranger has once again managed to create an unforgettably eloquent work in a refined and polished language!