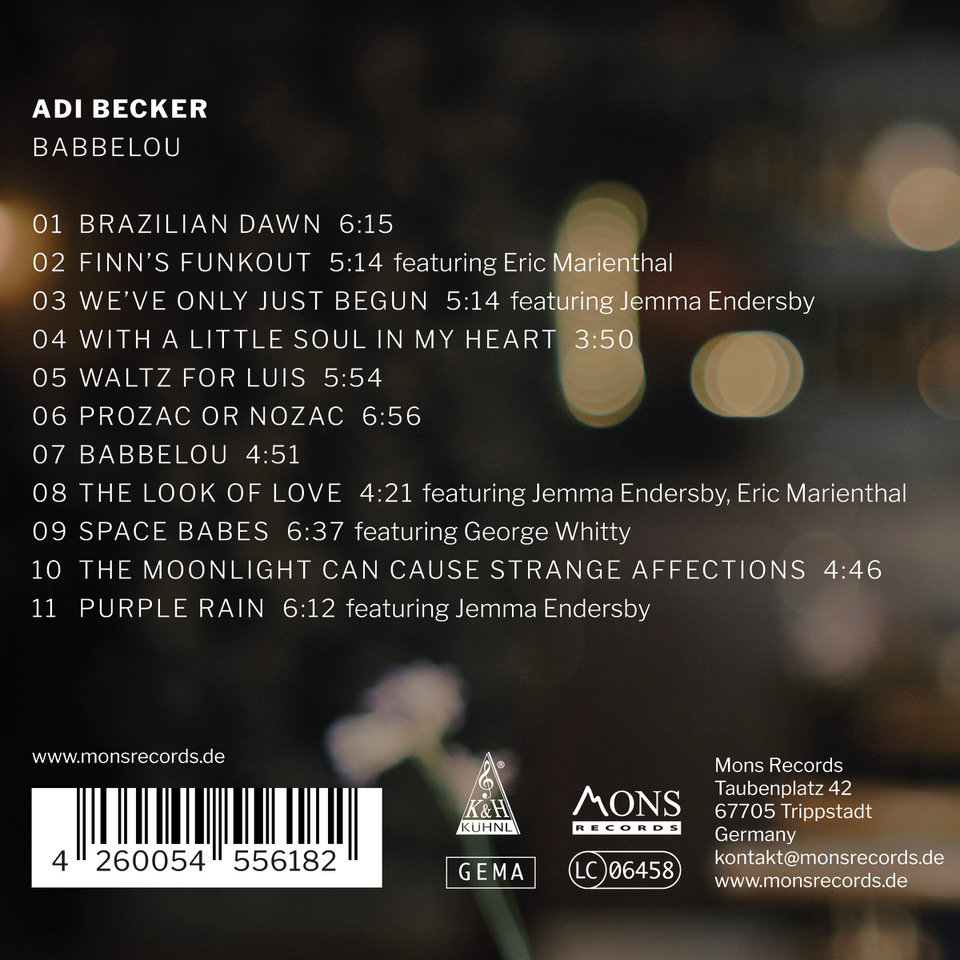 Music that touches your mind and soul. Music that provides for relaxing conversation as well as stimulating the intellect. Music that grooves like the devil, compelling you to listen with its intelligent compositions. Music that serves up a solid big band sound and that celebrates finely-shaped melodies. Music that pays stylistic tribute to easy goingjazz, as well as refining pop music pearls with its arrangements, and exploring musical depths…

All of these contrasts combined on one stylistically seamless album. It wouldn’t work? Of course it does!

“… my music is written for audiences and musicians alike. I like deep and intuitive grooves, melodies you can whistle along to, and arrangements that surprise and challenge musicians’ creativity and skills.”

Babbelou is the perfect proof that he knows how to transform these words directly into notes. He confidently and gracefully allows them to be heard, together with the Grand Central Orchestra Cologne, which he founded alongside saxophonist Torsten Thomas in 2007.

In addition to seven original compositions by Becker, and one by Thomas, there are three Becker-refined pop versions on the album: We’ve Only Just Begun, The Look Of Love, and Purple Rain. There’s no need to point out that each of these pieces shines individually, or that they all have their own mood and timbre. But Becker’s unique signature, his characteristic musical style, adds a special flow to the pieces collectively – it’s a drive that carries and distinguishes the entire album.

Besides the rousing playing of the Grand Central Orchestra (who, incidentally, can be seen once a month live in “Klub Berlin” in Cologne Ehrenfeld!), there is a fantastic mix of young musicians, some of whom are still studying at the University of Music, as well as old hands like Uli Launhardt, who has played with Edelhagen and Bert Kämpfert. On top of all this, the three renowned soloists – Jemma Endersby (voc), George Whitty (synth) andEric Marienthal (sax)– lavishly sprinkle their musical gold across the album, allowing its musical lustre to sparkle even more.

He composes and arranges songs for well-known TV shows, orchestras and big bands. He has also been a regular member of the Big Band der Bundeswehr for two decades, which – just to emphasise it here – is one of the best entertainment orchestras in Europe.

And now Babbelou! With this album, Adi Beckerhas hit the jackpot – musical entertainment of the highest level!