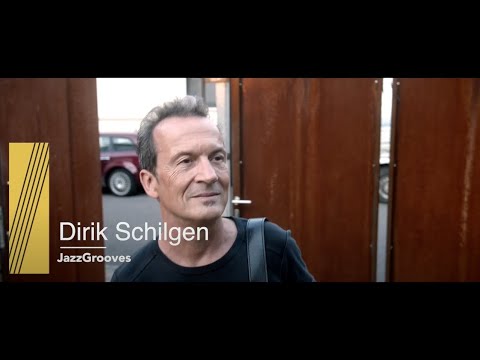 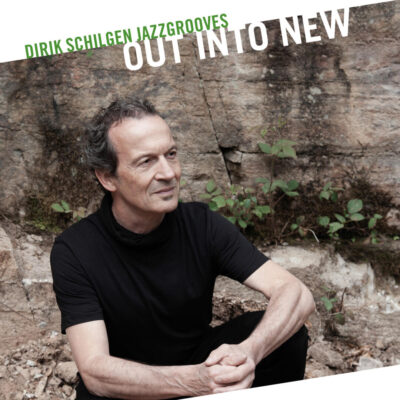 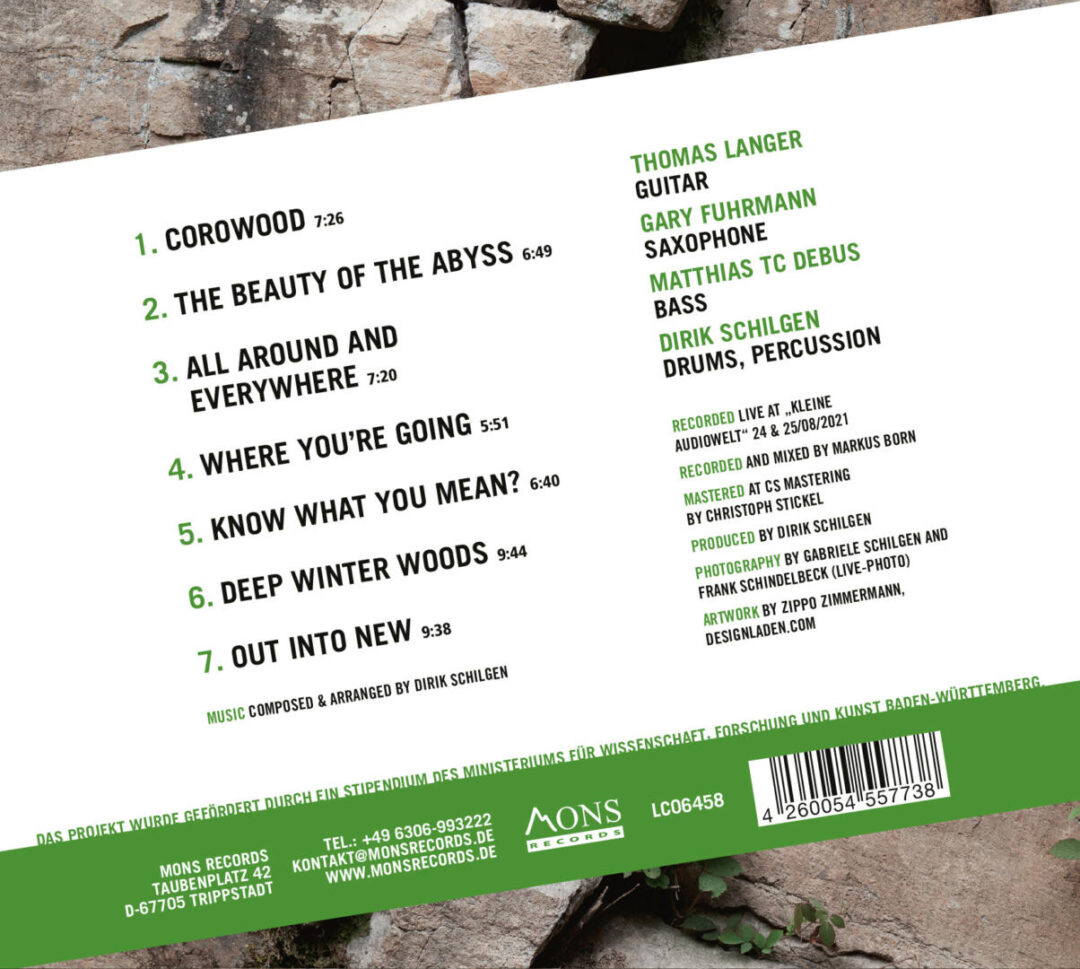 German based drummer Dirik Schilgen will release his latest album titled “Out Into New” on 9th of Sept. 2022 via Mons Records. This latest release is the forth album from Dirik as a band leader and follows his 2015 release “On The Move”.

This album features a new line-up to that of his last release and features Thomas Langer on Guitar, Gary Fuhrmann, Saxophone and carried over from the previous incarnation of the Jazz Grooves, Matthias TC Debus on Bass and of course band-leader Dirik Schilgen on Drums and Percussion. Dirik explained “After the release of “On The Move” in 2015 and the tour that followed, I felt it was time for a change. In late 2016 I played at the “Jazz Night” in Rodgau and it was here that I first met guitarist Thomas Langer. During that gig we also played a number of my own compositions and it felt very comfortable. It was through this experience that the idea to put together a quartet with guitar, bass and sax was born.”

Dirik then asked Saxophonist Gary Fuhrmann to join the project along with bassist Matthias TC Debus, who also appeared on the “On The Move” album. “with the line-up complete, I started writing the new repertoire for this line up” continued Dirik.

This new album features 7 compositions all composed by Schilgen and written specifically for this recording. Stylistically, the music is quite a departure from the more straight ahead repertoire featured on the “On The Move” album. “Out into New”, as the title suggests, features a new musical direction with more space and with the addition of Guitar to the line-up, presents a whole new soundscape.

From a Conceptual point of view the material from the album stems from the tragic loss in early 2020 of Dirik’s brother Achim and the loss of his good friend and colleague of more than 20 years, Christoph Mudrich just a month earlier. Top this off with a global pandemic that put the world on pause and it’s no wonder that Dirik came to the realization as to how fragile life can be. “All this made me think about how fast life can change or for that matter even be over. I started to think about that ever-present question, what is going on when life is ending” explained Dirik.

Dirik went on to say that two tracks on the album deal directly with the questions mentioned above, “Where you’re going” and the album’s title track “Out Into New”. Both tracks are framed as Bossa Nova’s with a soundscape the is reminiscent of the classic 1960’s sound. “Where you’re going” features a medium up tempo with the saxophone taking the melody and delivering a solo firmly rooted in the style of Stan Getz. On this track it’s also worth noting guitarist Thomas Langer’s beautiful acoustic guitar solo that floats above the overdubbed atmospheric electric comping.

The albums title track “Out Into New” that interestingly enough is also the closing track to the album is a slow medium Bossa with the outro moving to double time representing a more optimistic vision to leave the listener with. When speaking of this track, Dirik explains that he saw this change of feel as “wherever we may land, let’s try to make the best out of it.” With the title track also being the closing track on the album, Dirik’s statement somewhat more poignant.

The Album opens with “Corowood”, an odd meter jazz funk feel based around a rhythmic motive played by guitarist Thomas Langer. This track provides saxophonist Gary Fuhrmann a sparse but soild base to lay down a highly impressive solo before passing the baton to Langer for an equally impresive solo. Dirik explained that this track was a product of his experiences running during the pandemic. When listening to this track you will hear the footsteps used as a rhythmic loop throughout the track.

“Corowood” is not the only track on the album inspired by nature. “Experiencing and enjoying nature was a big influence on the compositions of this album. Especially during the pandemic I recognized how much I need walking or running in the woods, swimming outside and walking and hiking in the mountains to keep the balance in my life” said Dirik.

The second track on the album is titled “The Beauty of the Abyss”. This ethereal track, inspired by the view from the top of a mountain, features a dreamlike melody played beautifully by saxophonist Gary Fuhrmann with strong solo’s by both Fuhrmann and Langer. As with many tracks on this album Schilgen couches his compositions in compound meters yet, at no time does this effect the groove and this track is no exception.

As you can deduce from it’s title, the track “Deep Winter Woods” is also inspired by nature and presents a somewhat mysterious and dark atmosphere. Thomas Langer excels on this track with a spectacular guitar solo that channels many styles ranging from the blues to the avant-garde. Of special note here are the unisono thematic passages played by guitar and sax.

Opening with a tinge of New Orleans second-line and a 1960’s jazz soul inspired melody, “Know what you mean” follows with it’s infectious groove drawing the listner in. This track is a re-arrangement of a song that appeared on Dirik’s first album. Dirik mentioned that the tracks title was a nod to the political landscape of the time however it is still highly relevant today. Bassist Matthias TC Debus is provided the room to stretch out on this track with a captivating solo.

With “Know what you mean” being the oldest composition in this set, the most recent is “All around and everywhere”. This Latin flavoured song once again is couched within a compound meter. This track truly swings throughout as it weaves in a subtl and seemless maner through a number of implied feels. In Dirik’s own words this peice “was influenced by the feeling that we can hardly escape from all the disturbing news stories that are around us.”

To round things off Dirik concluded “All in all, these compositions are a product of the events over the last two years and I am very happy that I could put these ideas in such a musical and productive communication with these wonderful musicians and that I could realize this production.”

The music is conducted and carried by Schilgen’s filigree, brilliantly pointed and fine-nerved drums, which subtly charges the pieces with energy through its varying beats.

His drumwork is his way of conducting the band, connecting parts of the arrangement in their musical flow without giving any particular importance to the drum set.

In the service of the musical flow, the drum solos are often built into the arrangements as small spots so that they enrich the dramaturgy of the pieces and do not interrupt them as such.

The drum solo in „All Around and Everywhere“ seems like a recapitulation of what has been heard up to that point, the various rhythmic levels are run through again, shaped with filigree virtuosity, in order to lead into the end of the piece as if it were a matter of course.

“Out Into New” will be released on 9th of Sept. 2022 through Mons Records and will be available on CD and all digital streaming platforms.

Out Into New is dedicated to the memory of Christoph and Achim.