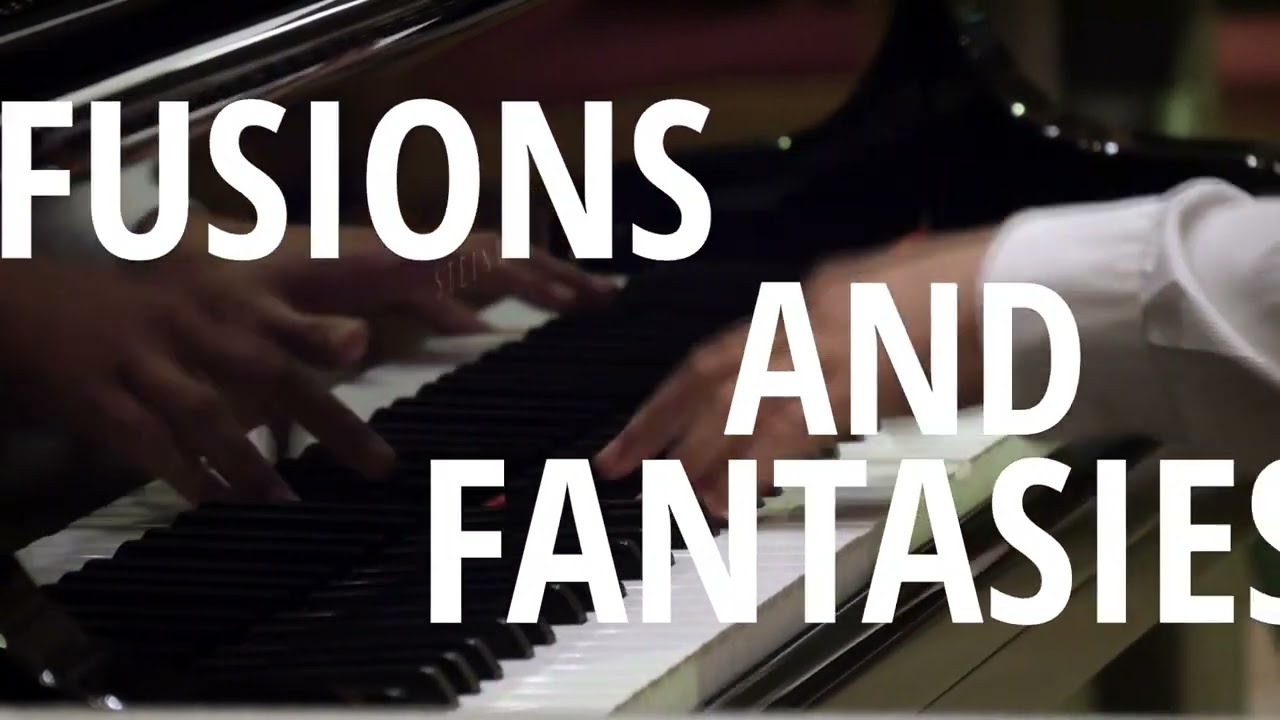 23.9.2022 will see the release of the latest recording from marimba player Fumito Nunoya and pianist Benyamin Nuss titled “fusions and fantasies” on Mons Records. This title is apt as both players have a broad and divers background across a number of styles and genres and these influences are successfully fussed in the performances captured on this recording.

The album is bookended by adaptions of two of the best known works by Italian violinist/composer Tomaso Vitali and tango legend Astor Piazolla respectively. In addition the album also features two world premiere recordings of works commissioned for this recording by Marei Suyama and Emmanuel Séjourné. Also presented on the album is an adaption of Russian composer, Alexander Rosenblatt’s “Carmen Fantasy” originally scored for clarinet and piano.

Fumito Nunoya and Benyamin Nuss have been exploring the sonic possibilities provided by the combination of the piano and marimba since the inception of the duo in 2016. The artistic vision of these two performers is to present modern repertoire while at the same time remaining accessible for a wide range of listeners. Fumito explained, “with the Marimba being a relatively new solo instrument in classical world, many of the pieces written specifically for the instrument are quite atonal. We wanted to appeal to a wide audience and for this reason we have commissioned many new works, including the two new pieces on this recording. We have also chosen to adapt a number of well known pieces written for other instruments for Piano and Marimba for example Tomaso Vitali’s ‘Chaconne in G Minor’ and Piazolla’s “Le Grand Tango” that also appear on the album.”

The album opens with Tomaso Vitali’s “Chaconne in G Minor”. Over recent years there has been some controversy as to whether or not this piece can actually be attributed to Vitali. Some claim that the harmony and structure of the piece is far closer to the romantic style of the late 1800’s. It has been hypothesised that the piece was written by composer Ferdinand David who first published the piece in 1867 in a bundle with other works by Vitali titled “ Die Hoch Schule des Violinspiels”. Controversy aside, the duo choose this piece for it’s universal appeal and consciously choose to give the piece a Romantic reading, highlighting the pathos and drama of the composition.

French composer and percussionist Emmanuel Séjourné is known mainly for his 2006 concerto for marimba and string orchestra. His music is characterised by it’s rhythmic, romantic and energetic elements and is inspired by the classical traditions of the western world and pop culture (jazz, rock, non-European music).

Séjourné’s work “Three Colors”, recorded for the first time on this album, was commissioned by the duo in 2019 and premiered live in concert the same year. Nunoya stated that “… when we first performed this piece live the reception is great and we really enjoyed performing it, so it was a logical step when selecting pieces for the album to choose to record it. In the album’s liner notes, Emmanuel Séjourné wrote “Indigo is rhythmic, violent, sometimes indecisive with nervous bursts, with stops like reflections, repetitions, hesitations, dissonances, different tempos for each of the instruments. Blue is a meditative walk through all that blue can suggest – softness, depth, calm, meditation, melancholy. Yellow is brilliant. This last movement has its roots in repetitive music, in jazz-rock. It is the sun, the light, the energetic and joyful pulse, always present, always grooving, always moving forward, always motoric: the pulse of life.”

Alexander Rosenblatt was born on July 31, 1956 in Moscow and studied piano and music theory at the Moscow Conservatory from 1975-1982. Since then he is worked as a freelance composer, pianist and educator. Rosenblatt has composed music for piano, cello, chamber orchestra and symphony orchestra. His compositions are characterized by elegant virtuosity, but also by the crossover between jazz and contemporary music.

Rosenblatt’s “Carmen Fantasy”, based on themes from the opera by Georges Bizet, was originally written for clarinet and piano however there are versions published for two pianos and piano with either clarinet, saxophone and violin. The adaption recorded on this album is based on the latter with the marimba part taken from the solo voice with the addition of extra harmonic texture.

The second world premiere recording included on the album is “Tree Dance‘’ composed by Japanese composer Marei Suyama. Fumito first met Suyama during a recording project in 2015 in Japan. He explained: “He (Suyama) came to the project as a sound engineer and later on I found out that he is actually a composer. He was interested in writing something for Marimba and Piano, so I asked him to compose something for me.” With this the seed for the composition was planted.

In the liner notes, Marei Suyama wrote of this piece “Many people consider classical music something you listen to quietly while frowning. Tapping your feet to the rhythm is simply unacceptable. However, I’ve always thought that classical music can be danced to – something that DJs could play at a club and you could move your body to. “Tree dance”, as the title suggests, is a musical piece which expresses the way trees dance in the wind. The music is almost like the classical version of Kraftwerk, combining the four-to-the-floor beats of techno music with the sharp sounds of modern music and organic poetry.”

Closing out the album is an adaption of Astor Piazolla’s “Le Grand Tango”, once again adapted and arranged by Fumito Nunoya for the duo. Le Grand Tango, or in Spanish “El gran tango”, is a single-movement piece for cello and piano that expresses the spirit of “nuevo tango”, a melding of traditional tango rhythms and jazz-inspired syncopation. Written in 1982, Le Grand Tango was first published in Paris thus its French rather than Spanish title.

Fusions and Fantasies will be available on CD and all streaming platforms on 16.9.2022 via Mons Records.

Benyamin Nuss is one of the most prominent and innovative pianists of the younger generation fusing a wide range of influences into a unique and personal style. His recordings on Deutsche Grammophon “Nuss plays Uematsu” and “Fantasy World” achieved critical acclaim as well as substantial chart success. Nuss has performed worldwide and it has been said that “his many concerts throughout the world have gone a long way in gaining a new young audience for classical music (Münster Klassik)”.

Growing up in a family of musicians, early on he discovered the music of Debussy and Ravel and through them found his way to Rachmaninoff, Liszt and Chopin, who are still among his favourite composers today. In addition to his work in the classical world, Nuss is also an excellent jazz pianist, who performs together with his father, the jazz trombonist Ludwig Nuss, and in the Fries-Nuss Quartet. His career received a decisive impetus in 2009 with the performance of symphonic video game music from the series Final Fantasy (Square Enix) together with the WDR Rundfunkorchester Köln. The live recording of the concert – “Symphonic Fantasies” (Decca) becoming a bestseller as well as garnering wide critical acclaim.

In 2019 he received the “Preis der deutschen Schallplattenkritik” (German Record Critics’ Prize), in the category “Grenzgänger”, for his recording of “Mia Brentano’s River of memories” (Mons Records) and in that same year, the album “Debut” together with Konstantin Reinfeld won the Opus Klassik award.

Born in Odate, Japan, and currently residing in Germany, Fumito Nunoya is steadily gaining international recognition as one of today’s leading marimbists. He actively performs in Germany and Japan as Adams Marimba Artist and has been described as “magnetic … impressive” by the Houston Chronicle and “agile and terrifically talented” by the Boston Herald.

Fumito Nunoya began playing the piano at age seven, and marimba and other percussion instruments at age thirteen. He graduated from Yamagata University (Japan) with a degree in Music Education, and Master of Music and Artist Diploma degrees in marimba performance from The Boston Conservatory (USA). He was the first marimba (or percussion) major in the school’s history to receive the later distinction (on full scholarship).

His solo marimba CD Red Dragonfly was described as a “monumental CD” (Percussive Notes) and “an example of artistic music making at its highest level” (PAS—Florida Chapter newsletter). His second CD “The Sower,” in which he focused on Japanese pieces, was released in August 2013 from Octavia Records, Japan. In August 2016, Mr. Nunoya released two CDs (“Piazzolla on Marimba” and “Classics on Marimba”) both on Oehms Classics with both CDs receiveing special commendation awards from Record Geijutsu Magazine in Japan. In February 2019, he released his 5th CD “Concertos on Marimba,” which received “Gouden Label” awards from Klassiek Centraal Belgium and 5 Stars on BBC Music Magazine.