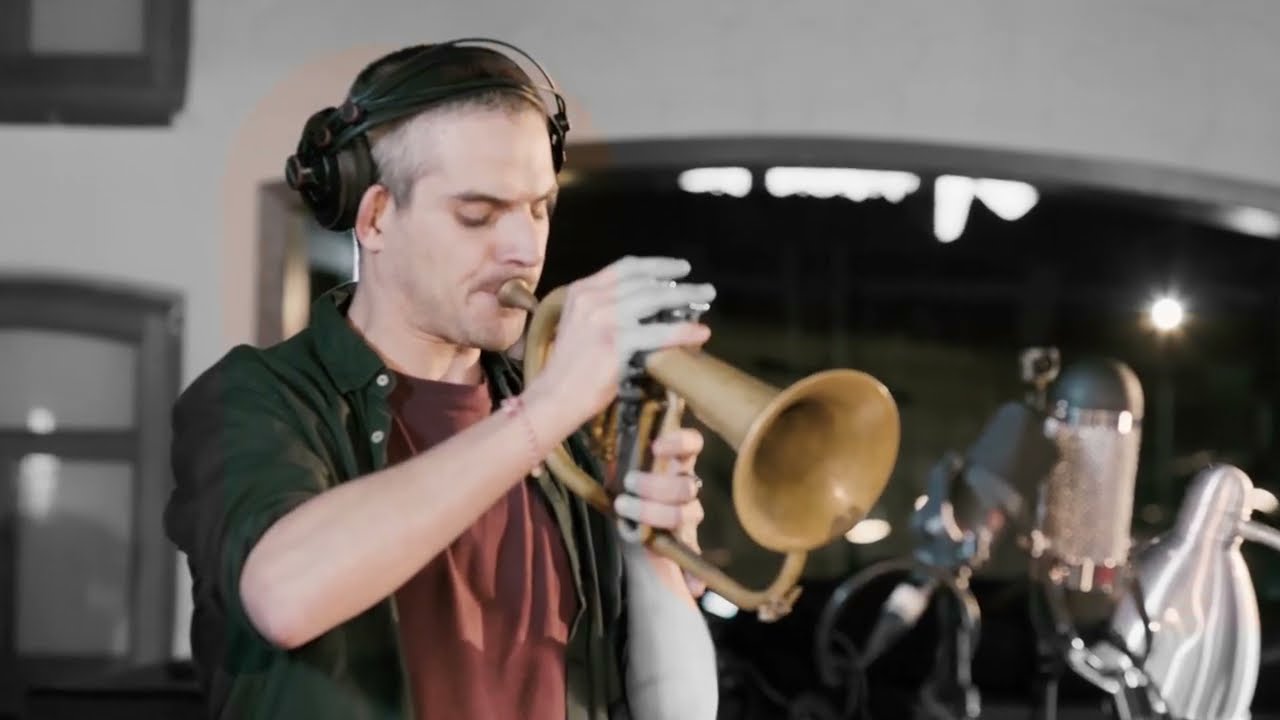 “A relaxing album that takes the wind out of the sails of stressed-out city dwellers.” (Stereo)

Soulcrane & Strings is the latest album by Cologne based trumpet player Matthias Schwengler and follows his 2020 release “Another Step We Take”. Released on the German jazz label Mons Records, Soulcrane & Strings, as the name suggests, adds a string quintet to the bands standard line-up of trumpet, saxophone, guitar and bass.

The string quintet on this album is somewhat unconventional in the fact that the line-up consists of three cellos and two violas instead of the standard string quartet line-up of two violins, viola and cello. The soundscape created by this line-up is darker and blends seamlessly with the horns. Matthias explained “It has been my lifelong dream to make an album with a large string orchestra at some stage in my career and this line-up is the ﬁrst step in that direction.”

Matthias formed Soulcrane at the beginning of 2015 together with Reza Askari (double bass) and Philipp Brämswig (guitar). Schwengler describes the bands music as Chamber Jazz and this album cements this concept further. The addition of the strings and the wonderfully crafted arrangements adds an extra dimension to the music with the strings forming an integral part of the melodic and harmonic soundscape presented on the album.

The album opens with “From West Coast to East Coast” and is one of three tracks that appear on the album inspired by Schwenglers passion for beer brewing. Matthias explained that this track is on one hand a musical description of the beginnings of his journey into the world of craft beer and the endless possibilities of taste. On the other hand it’s also a tribute to Brad & Jonny from the “Craft Beer Channel” on Youtube. Opening with a string and guitar intro setting up the groove, both saxophone and trumpet take the melody creating, for the listener, a taste of beverage to come. It’s the perfect opener.

Schwengler explained that he and his partner spent a great deal of time in Bulgaria in during the Pandemic, “During the Pandemic I looked for inspiration in other things. For example, the small town of Bansko in Bulgaria, which served as a retreat for my partner and I. We spent time brewing beer with my father, hiking in the mountains and enjoying the squirrels that nested in the garden”.

One of the compositions on the album based on these impressions is “Pirin’s Pearls” and refers to Bansko, the small town at the foot of the Pirin Mountains where the men of the family distil their own liquor (Rakia) lovingly known as Pirin’s Pearl. When speaking of this piece, Matthias explained “I use this title in a larger context: Pirin’s Pearls are for me the mountains; the people; the traditions; the family; the language and the food are all in my opinion the pearls this region has to offer.” The song starts with an ethereal melody played by Schwengler before moving to a 5/4 latin feel introducing the saxophone. Of note here is Philipp Brämswig’s beautiful guitar solo with superb counter movement played by saxophone and trumpet before fading to the end.

Continuing with the beer theme “Mariya and her Stout” follows. Opening with a pizzicato intro played on cello, the main theme is introduced by Schwengler on trumpet. With the addition of Matthew Halpin on saxophone the theme takes on a decidedly contrapuntal flavour with addition each new layer adding to the harmonic complexity. Schwengler provides a wonderful solo adding to the late night atmosphere before a short guitar interlude once again introduces the theme.

According to Matthias, “Mariya and her Stout” describes a day walking in London with his partner Mariya ending with the enjoyment of a very special stout. He describes the piece as “a relatively simple song that reminds one of the small pleasures of life that have great meaning.”

“Chip & Dale” is a piece dedicated to the two squirrels mentioned earlier that made themselves at home in the garden. This medium swing piece is introduced by bass and guitar with the melody taken by Halpin on saxophone. The track reaches it’s full harmonic richness with the entry of Schwengler on trumpet. Once again Halpin provides us with a strong solo, alternating between improvised and through composed passages together with Matthias. Philipp Brämswig is also provided room to stretch out over the juxtaposing backgrounds from the horns.

“Maex” is a composition by bassist Reza Askari and is dedicated to his deceased friend Max. Opening with a somewhat dark yet rich Neo-Romantic string introduction the track becomes somewhat darker with the entry of the guitar and the creative use of harmonics delivering a melancholic soundscape for Schwengler’s muted melody. The sparse but highly effective saxophone entries add an extra layer of pathos to this wonderful track.

Guitarist Philipp Brämswig penned the following track titled “Chania” that opens with a guitar intro before both horns take this intriguing melody that weaves effortlessly above the rich harmony. The third piece on the album inspired by craft beer is “Barley Wine”. Once again the strings return for this track largely reinforcing the harmony laid down by the guitar and providing room for both Halpin and Schwengler to converse.

Opening with a series of unisono single phrase statements first played by bass and guitar and then thickened with the entry of the horns, “Consolation one” follows. Of special note here is the trumpet trigged vocal samples. Closing out the album is “Two Bodhi Tree Leaves”, a Latin infused track featuring haunting solo’s from both saxophone and trumpet with the backgrounds provided by the strings. Matthias explained that this track is “a string arrangement of the same piece that appeared on the last record. It’s still a very special song for me and was written in Mayanmar after visiting the Shwedagon Pagoda in Yangon. It’s said that it was under these Bodhi trees that Budda found his enlightenment. Legend has it that if you ﬁnd a fallen leaf, it is a sign of good luck. I found two and wrote this piece afterwards.”

Matthias Schwengler and Soulcrane have already established a unique sound in the world of jazz and this album takes this to the next level. Soulcrane with strings will be released on 09.09.22 and will be available on both CD and of course all streaming and download platforms.