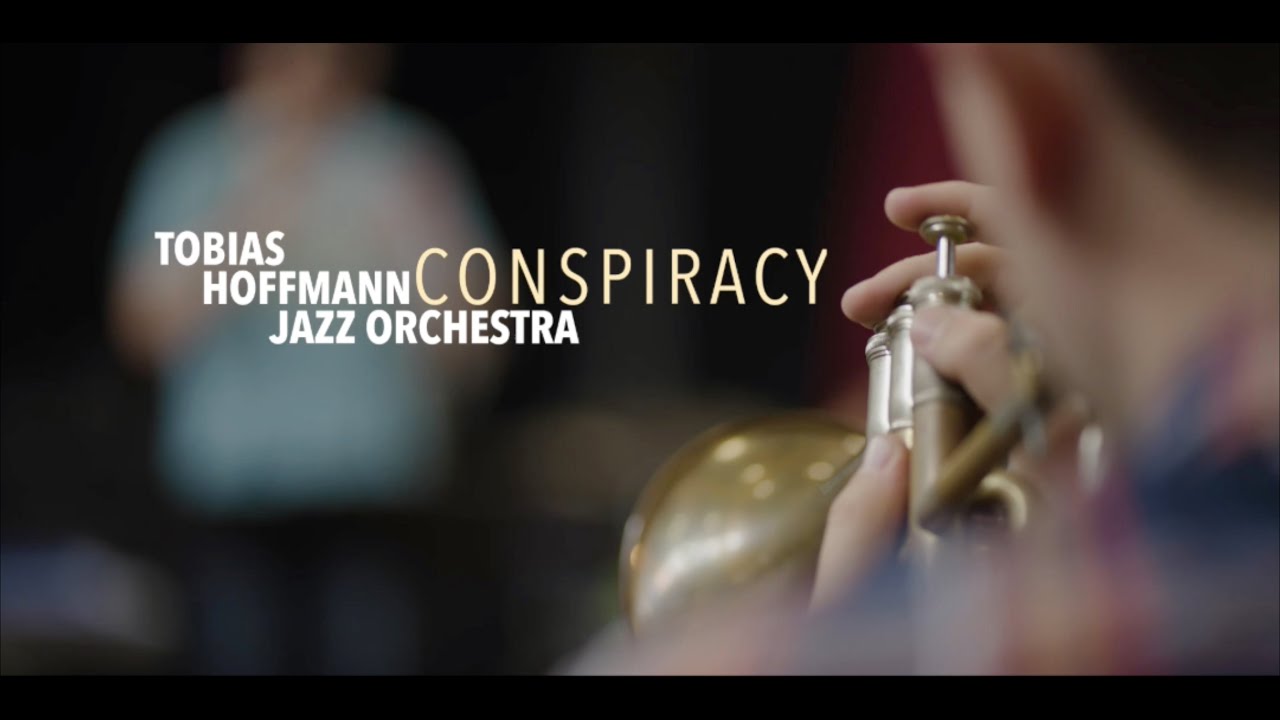 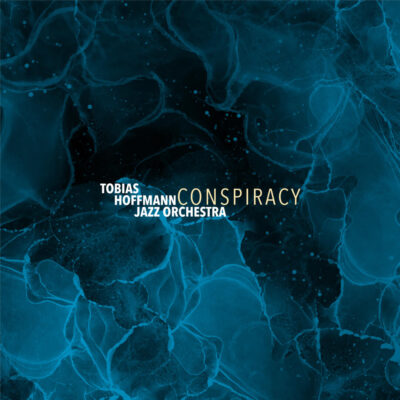 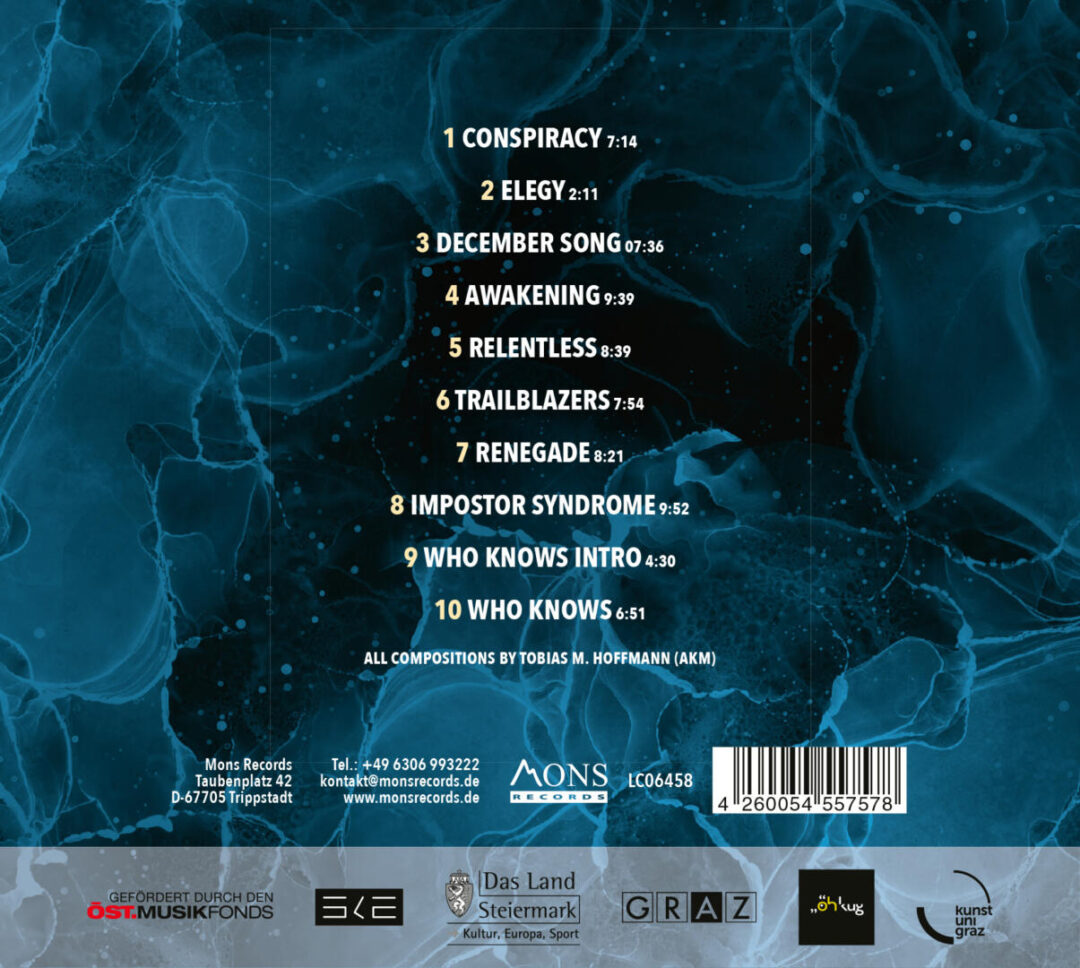 “Best Jazz Albums of 2022”
Jack Bowers, All About Jazz

On 9.9.2022 Mons Records will release the new album from the German saxophonist Tobias Hoffmann titled “Conspiracy”. Under the motto, things just keep getting bigger, this recording follows his 2019 release “Retrospective” recorded with a nine piece band and this time features a full big band.

Tobias stated that throughout his journey in music “… there have been two hearts beating in my chest: on the one hand that of the saxophone player and on the other that of the composer and arranger.” When you first listen to this recording it becomes clear that on “Conspiracy” Tobias has been able to merge these two hearts into one.

Speaking of the album Tobias explained “After releasing my CD “Retrospective” with my Nonet in 2019, I felt like taking the next step as a jazz composer and arranger by writing and recording more music for a jazz orchestra.” he went on to say “When at the end of 2020 I started planning this project I was full of doubt. We were in the middle of the second wave of the corona pandemic, half of Europe was in lockdown, concerts and jobs had been cancelled and I was really not sure whether it would be the right moment to bring a large jazz ensemble to the studio and record an album of challenging instrumental Big Band music in that period of time. But there was a soft voice telling me that it was worth going for it. Now looking back after writing, organizing, rehearsing and recording the music it feels almost surreal that is poised for release. I am very glad I had listened to that soft voice and recorded the music.”

The album opens with the title track “Conspiracy”. Tobias stated that this was one of his most challenging compositions to date and is inspired by the crazy conspiracy theories that emerged during the pandemic. “I realized how dangerous these can be, not only for the people who believe in them, but for our society as a whole” explained Tobias. The track opens with a rather bombastic tutti passage that certainly grabs your attention before settling done for the main theme. Of note here is the mysterious start to the saxophone solo. „Conspiracy“ was awarded the 3rd prize at the „Bill Conti Big Band Contest 2021“ organized by the American Society of Music Arrangers and Composers (ASMAC).

The following track titled “Elegy” is a fully through composed peice that features the bands horn section in a more orchestral context. The next cab of the rank is titled “3 December Song” and is a medium swing composition featuring Alto saxophonist Andy Schofield. Tobias explained that this piece was inspired by the music of Vince Mendoza, “When writing this composition, I started with the figure of the piano at the beginning of the piece, which immediately reminded me of some of Mendoza’s compositions. So I tried to loosely capture the feeling and flow of his music.”

“Awakening” is a composition about change. Tobias wrote this piece at time when he was experiencing change in his life. while he admitted he was struggling with this he also came to realization that change also brings opportunity. This somewhat melancholy composition features a wonderful solo by Jakob Helling on Flugelhorn that transitions to a more optimistic contrasting section of the arrangement.

The next track titled “Relentless” is a composition based on a twelve-tone row, a composition technique that was first made popular by the Austrian-American composer Arnold Schoenberg in the early 20th century. When speaking about this composition Tobias said “The composition is a mixture of different sections which are contrasting each other. It was an interesting process to learn as a composer how long one should stick to self-imposed rules and limitations and when to rid yourself of them and follow your inner voice.” It should be noted that this composition was awarded the first prize in the “Original Composition – Large Ensemble” category at the 2022 “45th annual Downbeat Student Music Awards”.

Featuring Jonas Brinckmann (Baritone Saxophone) and Kasperi Sarikoski (Trombone), the next track titled “Trailblazers” is a minor blues couched as a jazz waltz. “As a saxophone player I have always enjoyed playing these high-energy Big Band charts from the rich history of Big Band music and that’s why I wanted to write one for my own band as well.” stated Tobias. Both Brinckmann and Sarikoski deliver great solos here on Baritone Sax and Trombone respectively you will also find a highly interesting solo special for the entire Trombone section.

“Renegade” is a composition based on a 2 bar motif in 9/4 and features Simon Plötzeneder on trumpet. This composition is inspired by the American jazz composer Darcy James Argue and his “Secret Society” ensemble. For this piece Tobias experimented with incomplete chords and voicings to provide a modern and contemporary harmonic sound. Tobias said of this piece “I wrote this composition in a period when I was struggling to find my place in life and so I tried to capture the feeling of uncertainty in the composition.”

As you will read in the albums liner notes, many of the compositions on this album were inspired by psychology and psychological phenomena and the following track “Impostor Syndrome” follows in this vein. The Impostor Syndrome is a psychological term that describes a pattern of thinking in which human beings doubt their skills, talents, or accomplishments and are afraid of being exposed as a fraud. This odd-meter composition features two main soloists, Martin Harms (Tenor Saxophone) and Robert Bachner (Euphonium). Of note here is the unaccompanied piano cadenza by pianist Philipp Nykrin that climaxes into a full band tutti section to round off the track.

Serving as an intro to the final track on the album is “Who Knows Intro” and is a feature for the bands trombone section. Tobias explained “I truly love the sound of the trombone. Unfortunately, trombones sometimes live an inconspicuous life in a Big Band. So I wanted to give them the space to fully shine as a section.” The final track on the album is a departure from the rest of the compositions on the album and features a rock feel with featuring a great solo performed by guitarist Vilkka Wahl. This track just builds throughout culminating in a fitting climax to close out the album.

This recording shows Tobias Hoffmann firmly in control of his composer heart. The band is amazing with each section blending together in such a way that only more established bands sound. This recording certainly makes a statement and that is “The Tobias Hoffmann Jazz Orchestra is here and can’t be ignored.“