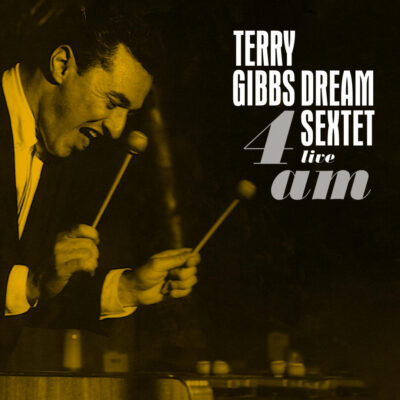 Terry Gibbs is one of the most legendary musicians in the world. He has seen and done it all. He has played with some of the greatest musicians in jazz history such as: Charlie Parker, Dizzy Gillespie, Benny Goodman, Buddy Rich, Woody Herman, Mel Torme, Buddy DeFranco, Tiny Kahn and many more. He also conducted tv shows for Steve Allen and Regis Philbin.

The Dream Sextet features some of the finest musicians from the West Coast. Conte Candoli was one of the best trumpet players and long time member of the Dream Band. He was one of Terry’s top 5 favorite trumpet players. Lou Levy was also a former member of the Dream Band and was one of the most in demand piano players. Bob Cooper was a heavy weight tenor player at the time who was widely regarded in the same league as Al Cohn or Sal Nistico.

The ensemble is backed up by the swinging rhythm section consisting of Bob Magnusson and Jimmie Smith. All these gentlemen were high in demand musicians at the time, so it was the first time that night that they all shared the stage together. The Dream Sextet recordings are all recorded live at Lord Chumley’s on July 30th 1978 in Playa Del Rey, California.

Terry has a talent of bringing out the best from his musicians. A live recording such as this one is the perfect proof of what happened in that moment.

The other aspect that is so special about these recordings is that all of the tunes are originals written by Terry. Terry’s originals are very melodic and lyrical such as Townhouse 3 or Tippie. You can sing along after hearing the tune only once. Terry wrote these tunes in such a way that the chord changes are fun to play over. You can clearly hear this, because of the way how the musicians are digging into these tunes.