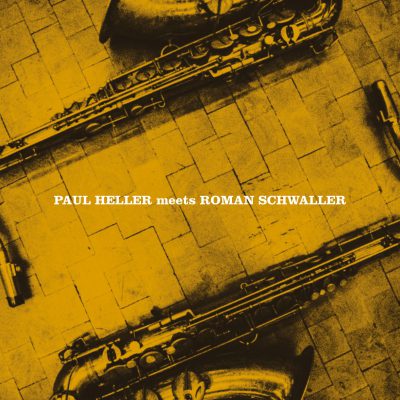 ”This music touches me deeply. I can hear the brotherly passion.“
(Jimmy Heath)

You just need to listen to Paul Heller‘s new CD for a few seconds before you notice it; here are two people who fit together like the pieces of a jigsaw puzzle. It‘s not just because they both play the same instrument, the tenor saxophone. No, it‘s something more than mere outward appearances. It‘s a long-standing friendship, a musical partnership, and a spiritual kinship. And they both pursue the one and the same goal. Paul Heller and Roman Schwaller just want to play. Simply playing. Uncompromising. Full of energetic commitment. Straight ahead!

Heller and Schwaller first met exactly twenty-five years ago, and numerous projects together have followed. The Swiss Schwaller (born in 1957) twice invited the Rhinelander Heller (born in 1971) to the musical meet up “Three Generations of Tenor Saxophone“ with Johnny Griffin (born in 1928).

The new album by these two representatives of the “younger“ generation is heavily influenced by the American saxophone legend, Johnny Griffin. Nevertheless, the nine tracks equally reflect both the history and current state of jazz. A few of the compositions are by Roman Schwaller, Thelonious Monk and Johnny Griffin. Five of the nine pieces were composed by Paul Heller, including the opener “Romanshorn“, which he dedicated to his mentor and musical role model Roman Schwaller (who was born in Romanshorn!).

Whether it be a ballad, mid-tempo or uptempo, what follows is a prime example of improvisation and interaction. In addition to Schwaller and Heller are the scintillating Martin Sasse (piano), Thomas Stabenow (bass) and Niklas Walter (drums). Here are three open-eared musicians who are happy to get themselves involved in this style of “playing“ again and again. It‘s not surprising that the tracks were recorded in the “classical“ style, and in the exact running order (with a maximum of two takes) as they are to be heard on the album.

Incidentally, aside from just listening to certain passages on the CD, it‘s definitely worthwhile to play it through in its entirety. That way you‘ll quickly understand what the saxophone legend Jimmy Heath meant when he said: “This music touches me deeply. I can hear the brotherly passion“.

The tenor saxophonist, composer and arranger, Paul Heller, has been a member of the internationally acclaimed and two-time Grammy award winning WDR Big Band since 2005.

Roman Schwaller is one of the most renowned musicians in the Swiss scene. He has worked with Dusko Goykovich, George Gruntz and Mal Waldron as well as many others. He also played regularly in big bands, including the Vienna Art Orchestra, the Count Basie Big Band and the NDR Big Band. His discography includes around seventy CDs. Schwaller taught at the Music and Arts University of the City of Vienna (MUK) in 2008, and was the initiator and artistic director of the international jazz festival “generations“ in Frauenfeld.