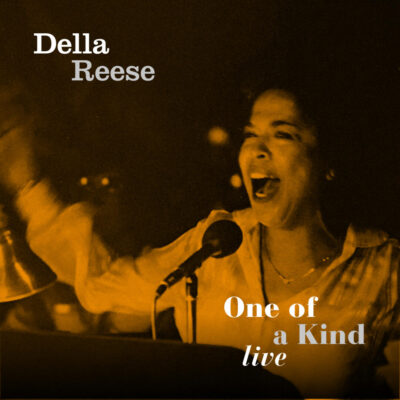 Extremely multifaceted and extraordinarily successful. These attributes fit hardly any singer better than Della Reeese. This jazz concert “one of a kind” is the only ever released “live” production of the singer Della Reese. Their accompanists were among the first guard of LA jazz musicians. As a listener you have the feeling of sitting in the middle of a jazz club.

„The best thing for you is me“. Della Reese knows what she is singing about and interprets the lyrics with a lot of authenticity. After all, she has been married four times. This Irving Berlin classic song is tailor-made for her.

In this version it is an easy bossa nova groove. The soloist is “top of the range” guitarist Kenny Burrell. “The Best Thing for You (Would Be Me)” is a popular song written by Irving Berlin and published in 1950. It was featured in the 1950 Broadway musical play, Call Me Madam, in which it was introduced by Ethel Merman in a scene with Paul Lukas. The 1953 film version also featured the song when it was sung by Ethel Merman and George Sanders.

In the course of her career, she released several highly successful records (including In the Still of the Night and And that Reminds Me) and received a Grammy nomination for Best Female Vocalist for Don’t You Know, an adaptation from Puccini’s La Bohème. This song was also her most successful single on the US charts. A number two on the pop charts as well as number one on the R&B charts.

In 1969, Della Reese became the first African American host to receive her own talk show. She subsequently appeared in numerous series and films as an actress; the highlight of her film career was the film Harlem Nights (1989), in which she starred with Eddie Murphy.

For the role of Angel she was nominated once for the Golden Globe Award and twice for the Emmy. In 1994 she was inducted into the Hollywood Walk of Fame. In 1998 she was again nominated for a Grammy for the gospel album My Soul Feels Better Right Now.
Even though her record company advised pop productions, – her love was for jazz. This live recording from a Los Angeles club shows her class as a jazz singer.

The live aspect of these recordings is so special, because not only do you hear the mastery of every musician on the band stand, you also hear the atmosphere in the room. You hear the enthusiasm of the band and audience. Della Reese has a talent of bringing out the best from his musicians. A live recording such as this one is the perfect proof of what happened in that moment. Guitar:

Kenny Burrell. He was voted Jazz Guitarist of the Year four times in a row by readers and critics of Down Beat, the world’s largest-circulation jazz magazine (1968-1971)