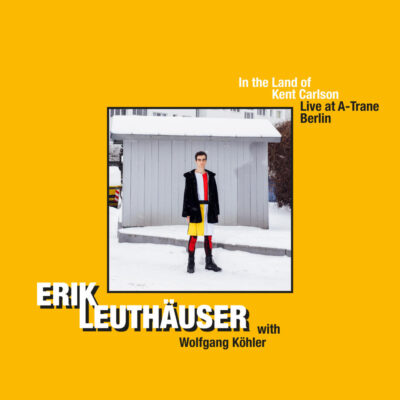 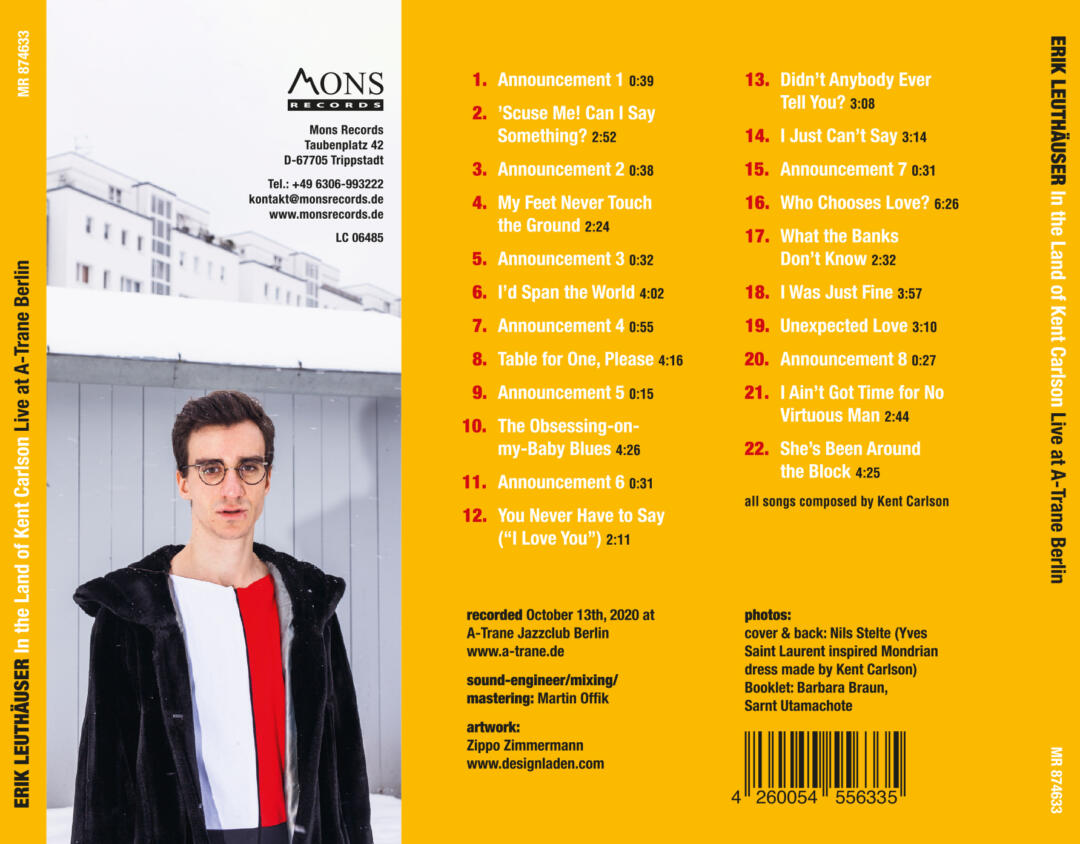 The Berlin-based singer, Erik Leuthäuser, is releasing – after the albums “Wünschen“ (2018) and “In the Land of Irene Kral & Alan Broadbent“ (2020) – an album of songs by Kent Carlson, a songwriter from Los Angeles, who has been singing in the MDR Rundfunkchor in Leipzig since 2010. It’s an indication of daring and creativity to sidestep the “safe“ choice of releasing an album of songs from the Great American Songbook in order to dedicate himself to the works of a lesser-known songwriter. But you can expect the unexpected from someone who took on the repertoire of Irene Kral and Alan Broadbent with such empathy, singular determination, and unique arrangements.

“Kent attended my concerts regularly and we developed a friendship … I was happy to meet another queer person with a deep understanding and knowledge of vocal jazz and the standards. This combination is rare. At some point, Kent called me and asked if I might like to sing his songs. When I received the scores, we were in like flint.“

Immediately obvious is the intense malleability Erik brought to this new album. Recorded with pianist, Wolfgang Köhler, last Autumn in Berlin’s jazz club “A-Trane“, it takes one swiftly to the New York cabaret scene, which up to the late 90s was a giant cosmos of clubs, theaters, small venues and countless truly tremendous – but nearly entirely unknown – singers. And yet, a comparison with the most successful artists of that scene is justified: one thinks of Blossom Dearie in Danny’s Skylight Room, or Susannah McCorkle in the noble and prestigious Oak Room at the Algonquin. But mostly, one is reminded of the gifted songwriter, singer and pianist, Dave Frishberg, whose songs have been adopted by a bevy of artists, the likes of Shirley Horn, Rosemary Clooney, Anita O’Day, and the aforementioned Blossom Dearie and Irene Kral. “Kent’s lyrics sometimes put me in mind of the candor and wit of Dave Frishberg or Bob Dorough,“ Erik explains; and indeed, pieces like “’Scuse me! Can I Say Something?“, which leads this album, are a nod to the consummate artistry of Bob “Devil May Care“ Dorough. The humorous wordplay, double entendres, and the unusual stories in his texts are consistently outstanding. Take “The Obsessing-on-my-Baby Blues“ as a typical example, a song that seems to have been tailor-made for Blossom Dearie.

“He tells of a time when the crazy obsession over a person could still be poetically described as a malady that gives one the ’blues’. But the well-known therapy for any form of depression is laughter. And I had to laugh a lot as I learned this practically absurd text.“

Ballads, nevertheless, don’t get short shrift among the lyrics. “You Never Have to Say ’I Love You’“, written as an homage to the wonderful Jo Stafford, shows the vulnerable side of Erik’s voice: his stylish fragility and his ability with velvet tone – which he internalizes primarily in the high range to a gossamer perfection – give this album a further extra special touch. “That was the first song I had ever sung of Kent’s output. The lead sheet fell out of a stack of scores Kent had given me, and when I played and sang the song at the piano, I recognized immediately what a good composer Kent is. All of Kent’s songs have the timelessness of jazz standards mixed with good, authentic texts. I particularly appreciate the message of this song: Love doesn’t need a lot of words. Love is action!“

As the perfect collaborator at the piano, Wolfgang Köhler doesn’t just provide the obligatory accompaniment, but rather gives greater depth to the stories through judicious nuances of tension and release. His short, but cleverly appointed solo in “Didn’t Anybody Ever Tell You?“ proves he is a pianist who is not satisfied to just play along, but has obviously taken the lyrics to heart. Kent Carlson’s pieces take their place easily among the canon of the great songwriters, and it would not be surprising to find other singers availing themselves of this new repertoire after the release of this album. Sometimes influenced by cabaret, sometimes by jazz (“I Just Can’t Say“), then again sometimes by musical theater (“Who Chooses Love?“), here is definitely a creative genius at work. Erik woos the listener in “Who Chooses Love?“ through his warm timbre and a wonderfully refreshing, shallow vibrato, which is the right approach for such a deeply melancholy ballad. And in general, vibrato is overrated.

The songs move harmonically on in the 14-song set, and there it is again: the light hand and frivolity, the wit and humor à la Frishberg/Dorough in the swinging song “What the Banks Don’t Know“. Erik presents most of these songs to his audience in an unusually invigorating way, which again reminds the listener of the New York cabaret acts. And who could tell slutty stories better than these queer musical warlocks, Kent Carlson and Erik Leuthäuser? The last two songs of this wonderful album – “I Ain’t Got Time for No Virtuous Man“ (with a pithy nod to the Gershwins), and “She’s Been Around the Block“ – contain bawdy phrases in the style of Amanda McBroom or Ann Hampton Callaway.

Erik Leuthäuser, with the songs of the brilliant writer, Kent Carlson, and in his collaboration with the outstanding pianist, Wolfgang Köhler, has turned the page to a new, simultaneously relaxed and energizing chapter.