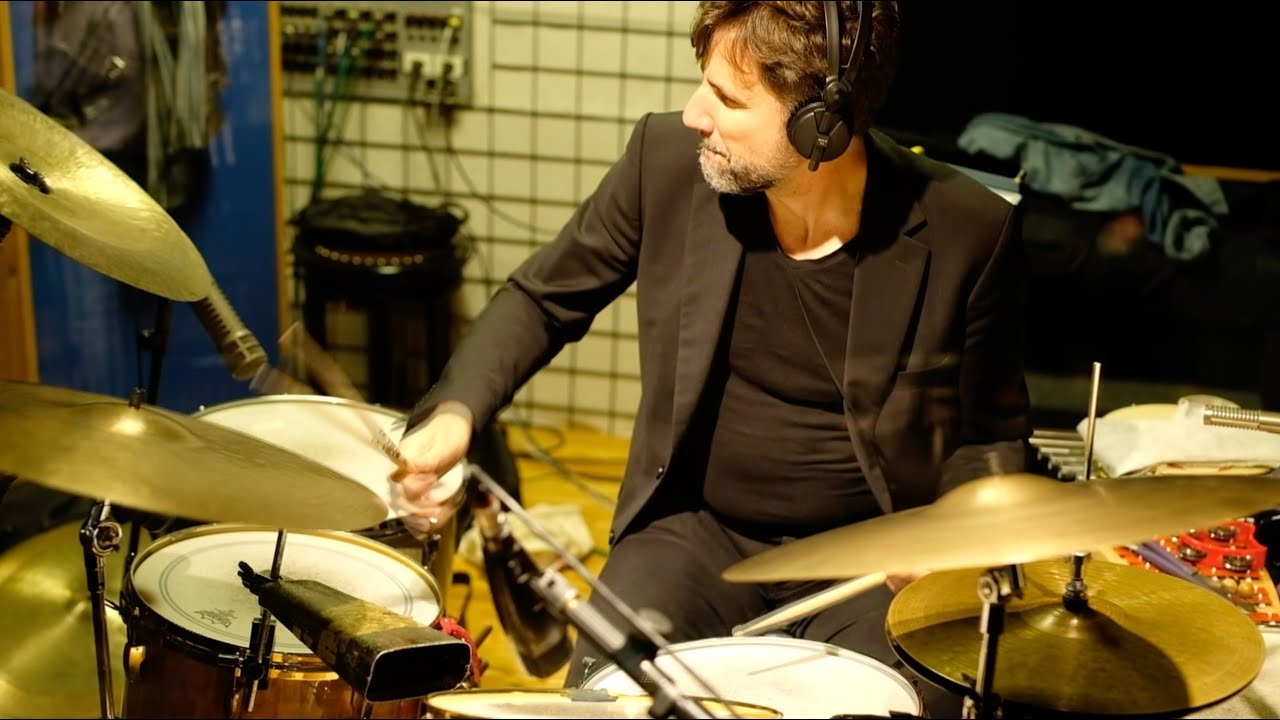 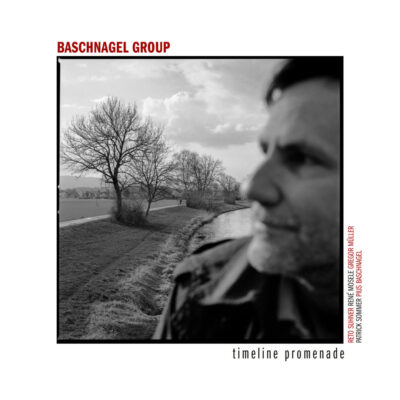 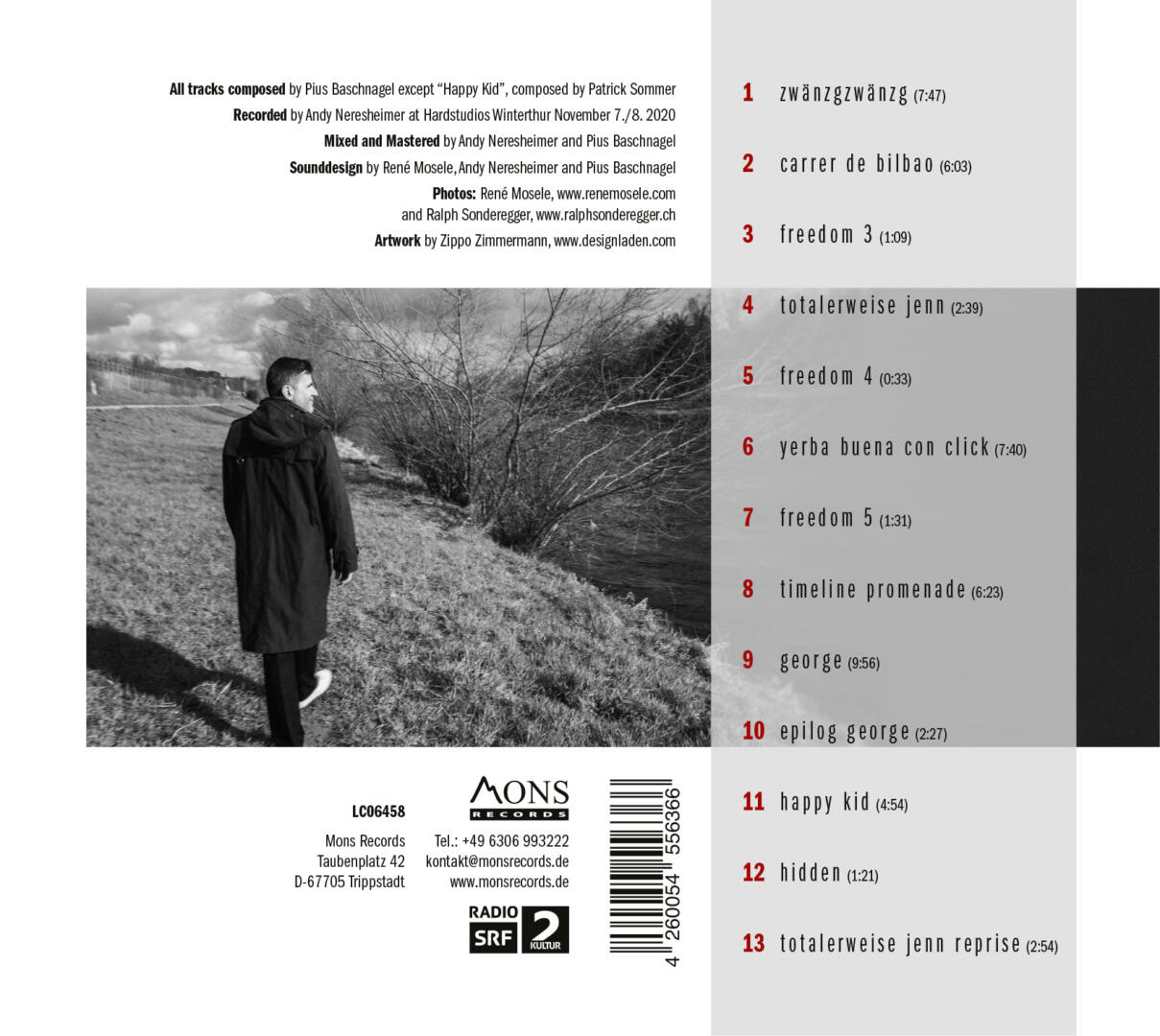 “It was impressive to see how easily and without much planning the Baschnagel Group recorded the new music in the studio.”
(Roman Hošek, Jodok Hess, SRF2 KULTUR)

“… vast soundscapes in which you travel from one piece to the next. This kind of sound design is rarely heard on a true jazz album, where improvisation takes center stage.”
(Kulturclub Magazine, January 2022)

Timeline Promenade is the second album from the Baschnagel Group, led by Swiss drummer Pius Baschnagel, and follows their 2017 debut release titled ‘Hello Dear Zyklop’. The album was recorded directly after a series of concerts titled the ‘Celebration Tour’ throughout Baschnagel’s native Switzerland in the autumn of 2020. And yes, for those wondering, there were live concerts taking place in Switzerland at that time. “I practically gave myself this tour for my 50th birthday.” stated Pius.

Recorded at the renowned Hardstudios in Winterthur directly after the tour in November 2020, the album features 13 original compositions all penned by the leader with one track “Happy Kid “contributed by bassist Patrick Sommer.

Pius Baschnagel is well known on the Swiss jazz scene as a ‘first call’ drummer and during his career has notched up an impressive list of credits as a side-man including the NDR Bigband, the Zurich Jazz Orchestra, Benny Golson, Joshua Redman and Till Brönner, however, it’s his work with his own group that has drawn the most attention. The Baschnagel group is a standard jazz quintet line-up and features in addition to Baschnagel on drums and percussion, Reto Suhner – saxophones, René Mosele – trumpets, Gregor Müller – piano, keyboards and Patrick Sommer on both electric and double bass.

What makes this line-up unique is that all members of the Baschnagel Group are multi-instrumentalists bringing instruments such as Moog, Electronics and the use of a Theremin to be added to the mix. In addition on “Happy Kid” you are introduced to the Moroccan bass instrument, the ‘gimbri’. This track with it’s infectious afro-grove is one of the albums highlights. Pius explained: “I love to let the guys experiment and bring in new ideas and this includes new instruments”. This feeling of collaboration also extends to the arrangements, “most of the pieces are hatched, developed and realized in a friendly, creative, playful collective of solidarity.” Pius went on to say.

Many of the compositions were composed during the early days of the pandemic including the opening track ‘Zwänzgzwänzg’ (Swiss German for: twenty twenty). Pius describes this piece as an ode “…that reflects the turbulent year that changed so much.” This track is a medium tempo swinger featuring solo’s from René Mosele on bass trumpet and Gregor Müller on piano and forms a perfect opener for the album.

A number of the other tracks including “Carrer de Bilbao” and “Yerba Buena Con Click” stem from late 2019 during a sabbatical in Barcelona. Pius explained in the albums liner notes that “These tracks contemplate the processing of personal experiences and emotional worlds of that time” he went on to say “The album reflects my inner sounding world of the last few years in different colours, shapes and styles”. “Carrer de Bilbao” opens with an ethereal soundscape reminiscent of a late summers day on the coast of the Bay of Biscay while “Yerba Buena Con Click” verges into the Fusion world resting on a great groove held down by bassist Patrick Sommer.

The music presented on Timeline Promenade is without doubt rooted in the jazz tradition but with the addition of the Baschnagel Group’s own unique flavour. Thematically there is a carefully designed musical arch running through the compositions that reflects events, moods and a view of the current world in which we live. Throughout the album the main tracks are interspersed with a number of fascinating and unique short tracks that function as segues and tie this eclectic mix of contemporary jazz together. This album has something for every jazz fan.