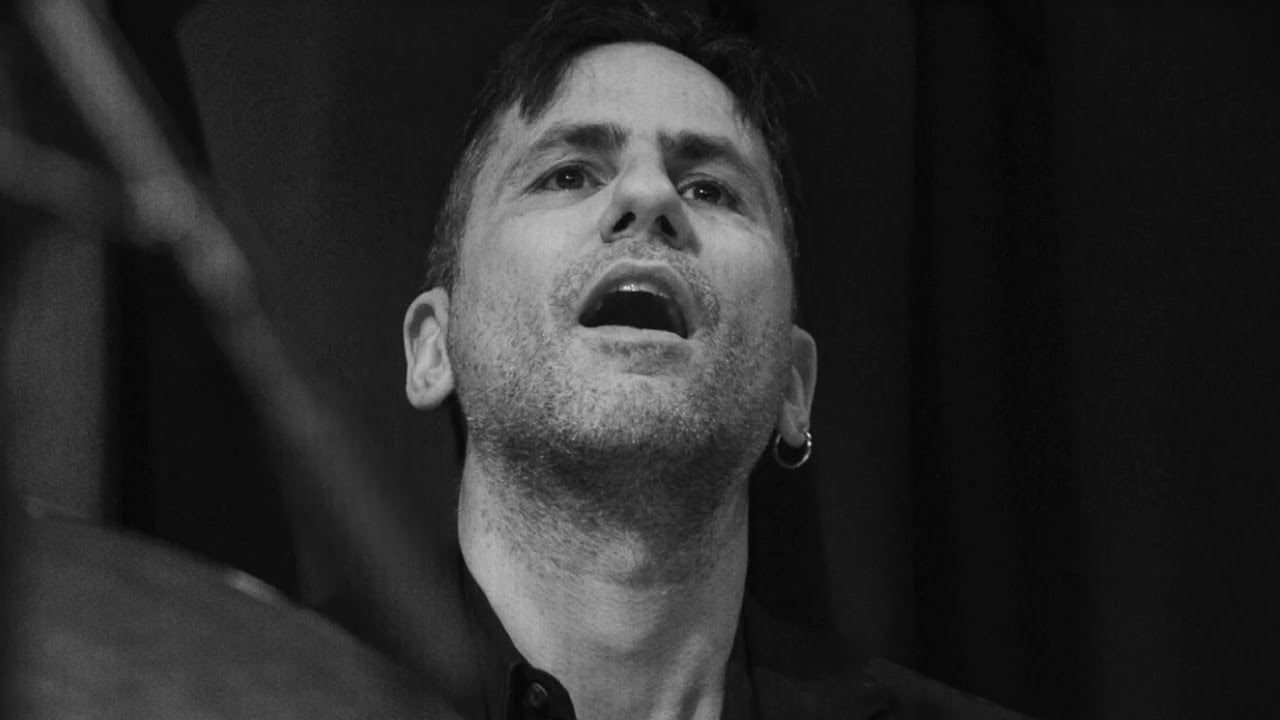 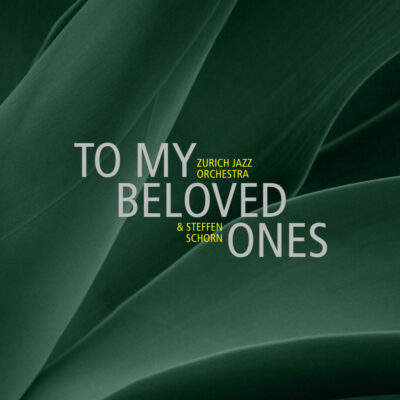 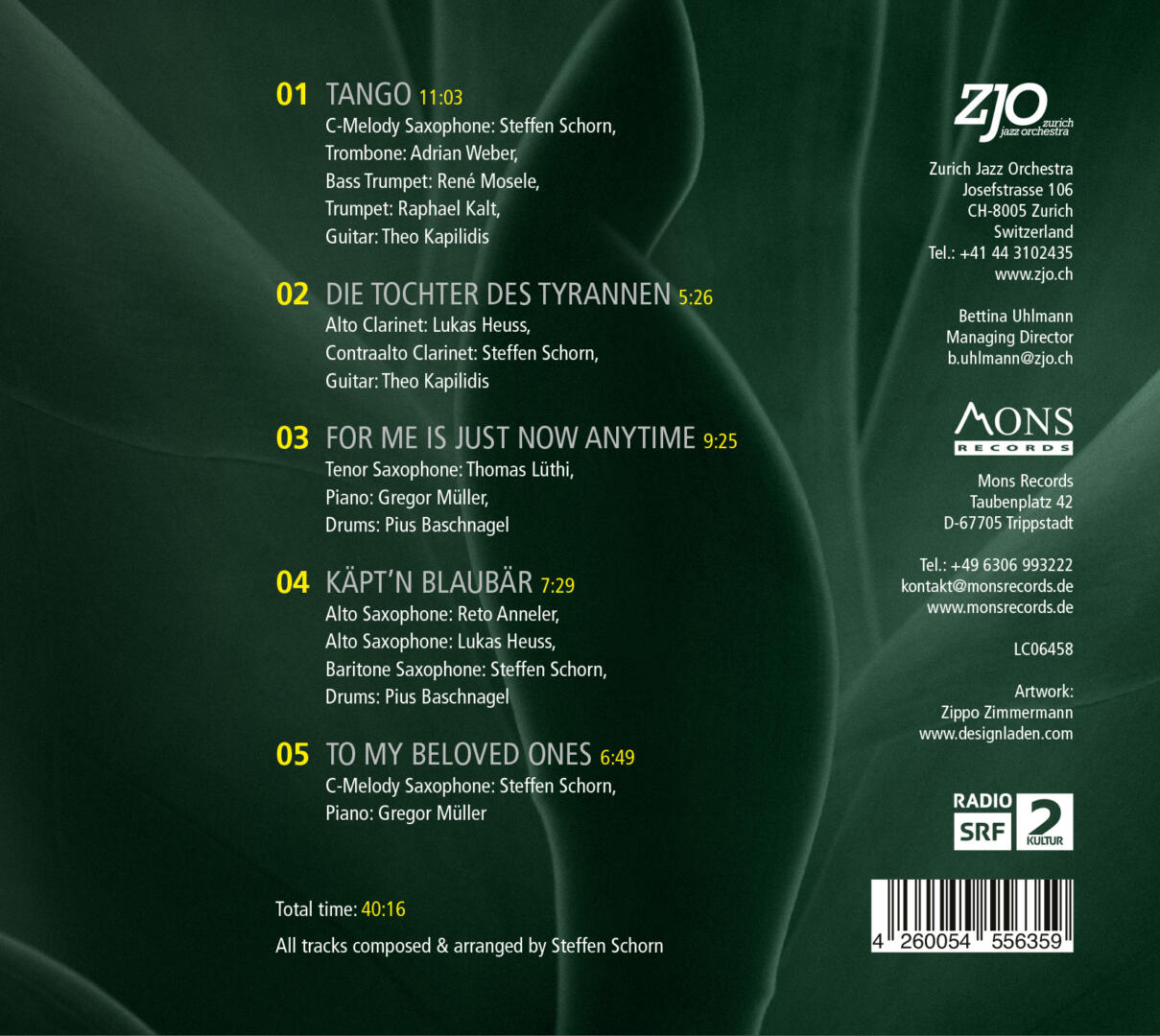 “To My Beloved Ones has everything in the right place, making the sounds glow with an air of collective consciousness.”
(Jazztrail, 12. Sept. 2022)

To “To my beloved ones” is the third and final album in the trilogy of recordings by “Zurich Jazz Orchestra” featuring the compositions by Steffen Schorn.

Formed in 1995 the Zurich Jazz Orchestra has rightly earned its place among Europe’s top professional Big Bands. Around the turn of the millennium, the band took its first big steps in development when Stefan Schlegel took over the musical direction in June 2000, and Bettina Uhlmann the management and administrative direction. It was also in this period that the ZJO cemented its collaboration with the iconic Zurich venue, Moods Jazz Club providing the band with platform for regular concert programming. During the ensuing period the band produced three albums (“Beyond Swiss Tradition” (2005), “New Plans” (2008) and the 2012 release “Song”) and began building the bands international profile.

During his six-year tenure as musical director of the band, Steffen further oversaw the continuation of the bands artistic development. During his six seasons as musical director, Schorn delivered over 100 different compositions and arrangements. Each concert had a completely new programme and Steffen admits keeping up this pace had been adventurous and at the same time extremely demanding. The positive side of this was that it forced a sense of “alertness of the moment” within the band. In 2017 the band entered the studio to record their fourth album and the first release in a trilogy under the direction of Steffen Schorn titled “Three Pictures” (2018) with the second in the series “Dedications” following in early 2021. Both albums not only received critical acclaim but also demonstrated the virtuosity encapsulated with the Zurich Jazz Orchestra.

Toward the end of 2019 Steffen retired from his role as musical director of the Zurich Jazz Orchestra to continue in the position of composer-in-residence. Speaking of this Steffen stated: “I love working with this band and when I first took on the position it came at just the right time. I still had a lot of items left on my musical bucket list and I knew this band had what it takes to achieve this.” With a full-time teaching position as head of jazz department at the Nuremberg University of Music and many other musical commitments throughout the world it became more and more difficult for Steffen to manage his schedule. “I was constantly travelling, in fact, at one point I was travelling more than 1000 kilometres a week. I wanted to concentrate more on my writing and arranging so taking the position as composer-in-residence made sense to me.” He went on to say: “My new role as composer-in-residence now gives me the opportunity to take a step back and dive deeper into the inner world of emotions, memories, feelings and write brand new compositions as well as taking older pieces out of the treasure trove and create fresh custom-made orchestrations for the ZJO.

The album includes five original compositions, all composed and arranged by Steffen Schorn, and from a musical perspective continues from where “Dedications” left off. Speaking of diving into the treasure trove of older pieces, this album opens with a track titled “Tango” that dates to the early repertoire from the Duo Steffen had with Swiss clarinettist Claudio Puntin, originally written in 1992 on the Duos first trip to South America. While not a true tango in the literal sense, this piece is more of a metaphor and declaration of love for the South American continent, its people, culture, and natural beauty. Tango features what can be described as a miniature concerto for C-melody saxophone in its intro and references several Latin styles featuring impressive solo work from René Mosele on bass trumpet and Raphael Kalt on trumpet.

Inspired by the unapproachable beauty of the island of Crete, the following track titled “Die Tochter des Tyrannen” (The tyrant’s daughter) is a feature for guitarist Theo Kapillidis. This piece opens with a dark and mysterious intro and builds throughout before the final theme explodes in a brilliantly orchestrated big band tutti. “For Me Is Just Now Anytime” truly fits with the theme of the album’s title and is dedicated to Steffen’s wife, cellist Ulrike Zavelberg. Steffen explained “For Me Is Just Now Anytime” was on my answering machine one day after our first meeting at a student concert with jazz band and string orchestra along with the words “… see you sometime …” It was like a bolt out of the blue, Ulli had entered my life. After 30 years together with its ups and downs, I thought it was high time that this piece finally appears on CD in a new big band version with the Zurich Jazz Orchestra.

Käpt’n Blaubär is inspired by the book “The 13 1/2 Lives of Captain Blue Bear” by Walter Moers that was first published in Germany in 1999. This piece celebrates the unbroken art of living while mastering the most extreme challenges encountered on Käpt’n Blaubär’s adventurous journey to the legendary city of Atlantis. This track features the two alto saxophones of Reto Anneler and Lukas Heuss as well as Steffen Schorn’s baritone saxophone. In short it is declaration of love for the manifestations of the soul, the omnipresence of imagination and of universal possibilities.

The final tack on this album is not only the title track for this release but also the closing statement from the trilogy. The trilogy began with the opening piece on the album “Three Pictures” titled “Eye of the Wind”. The piece was finalised by by Schorn during the journey to his 1st concert with the Zurich Jazz Orchestra. “To my beloved ones” was premiered at the last concert the band performed with Steffen in the role as musical director and conductor and with special guest Dave Liebman. Steffen recalls “It was exactly 17:59 and 59 seconds when the sheet music for this piece was sent to the Moods jazz club office to have the parts printed, the band and Dave were already sitting ready for the 18:00 sound check. As always, the orchestra made the music sound brilliant in no time at all. In essence we can see this piece as one of the two bookends to the trilogy.

Steffen concluded that “in short, this final piece, and indeed the album as a whole, is an ode to all the people who are dear to me – my family, my many friends near and far, and of course the Zurich Jazz Orchestra, my beloved Zurich-family”.

This recording and indeed the other two releases in the trilogy highlights not only the great musicianship housed within the Zurich Jazz Orchestra but also shines a spotlight on one of Europe’s leading Big Bands at the top of their game.