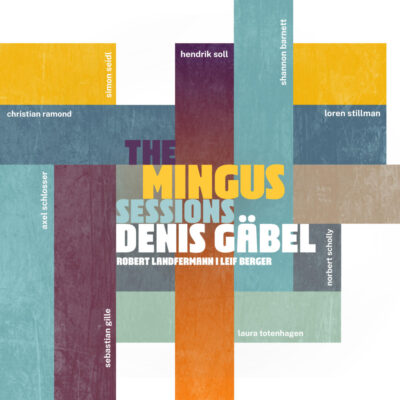 German saxophonist Denis Gäbel stems from a musical family and with this in mind, it’s no wonder that he started his musical journey at a young age. With his first musical steps taken with the Cello and Piano, it wasn’t long before he finally discovered the Saxophone. At the age of 13 Denis won the first prize at the German youth jazz competition “Jugend jazzt” and it was in this period that he first discovered the music of Charles Mingus. “I had my first contact with the music of Mingus at the age of 13 at the JungendJazzWorkshop NRW. Since then, I’ve been a passionate fan of his work. The first Mingus album I heard was his “Blues and Roots” and still to this day it’s my favourite album” explained Denis.

Fast forward close to 30 years and this album titled “The Mingus Sessions”, a homage to the music of Charles Mingus, has finally seen the light of day. In 2020 Gäbel had planned a recording with his German-American quartet for Deutschlandfunk however, it comes as no surprise, that the project had to be postponed due to the Corona pandemic. With the studio time still available, Gäbel had to quickly change tack and decided to honour the music of Charles Mingus. Denis explained that at the time of these recordings the world was in lockdown, concerts could not take place however it was possible to still record, as long as certain precautions were in place. Providing some background Denis said “I had the idea of using the Deutschlandfunk slot to record an album with the music of Charles Mingus, after all, in 2022 Charles Mingus would have celebrated his 100th birthday. The plan was to use a basic saxophone trio with Robert Landfermann on double bass, Leif Berger on drums and myself on tenor saxophone. Seeing that there were many musicians at that time with time on their hands I invited one guest per track to come to the studio where we would just jam on his compositions without making any major arrangements.”

The album opens with “Orange Was The Color Of Her Dress”, first recorded on the 1964 album Mingus Plays Piano. Special guest on this track is the pianist Simon Seidl who together with Gäbel contribute strong solo’s above the rhythmically complex bed laid down by the rhythm section. Trumpettist Axel Schlosser joins the group for “Jump Monk”. Opening with a collective improvisation that drifts in and out of the unisono theme. On this track both Schlosser and Gäbel show an amazing amount of simpatico as they weave seamlessly through the changes.

The following track is “Fables of Faubus”. This composition first appeared on Mingus’ 1959 album, “Mingus Ah Um” and is one of his most explicitly political works and is a direct protest against Arkansas governor Orval Faubus who in 1957 sent out the National Guard to prevent the racial integration of Little Rock Central High School by nine African American teenagers, in what became known as the Little Rock Crisis. Keeping the original recordings “Jazz March” feel, this track grooves from start to finish. The featured guest on this track is Loren Stillman on Alto Saxophone who together with Gäbel deliver substantial solo’s. Of special note here is the bass solo by Landfermann on double bass.

Perhaps one of the most interesting tracks on the album is the groups take on “Work Song”. For this track Gäbel adds a second double bass played by Christian Ramond to the mix. Together with Robert Landfermann both basses fit together seamlessly creating a haunting polyphony as the basis for Gäbel to stretch out on. Also stemming from the “Mingus Ah Um” album is, “Open Letter to Duke” that features guitarist Norbert Scholly in a true uptempo swinger that morphs through a number of feels and tempos. Vocalist Laura Totenhagen is the guest on “Eclipse”. There’s no doubt that Mingus had the heart of a poet and his words are poignant and rich with imagery. In “Eclipse” he metaphorically uses the sun and moon to describe interracial love and the public resistance he and others experienced during this time period. Totenhagens vocal performance on this piece channels this metaphor with great sensibility and together with Landfermann’s bass contribution create one of the most moving tacks on the album.

“Prayer For Passive Resistance” follows and features the addition of Hendrik Soll on Drums before moving on to “Remember Rockefeller at Attica” featuring Trombonist Shannon Barnett. Axel Schlosser returns for “My Jelly Roll Soul” that verges on a second-line feel and sees Schlosser making good use of a cup mute. Closing out the album is one of Mingus’ best known compositions “Goodbye Pork Pie Hat”. Featuring the addition a Tenor Saxophonist Sabastian Gille both he and Gäbel provide a stunning performance on this haunting tune, the perfect closing for this wonderful album.

With the Mingus Sessions, Denis Gäbel shows himself to be a musician at the top of his game as well as displaying the ability to put together a great cast of characters to tell this story of the music of Charles Mingus. The performances are spontaneous and capture the zeitgeist of the classic Mingus recordings while at the same time looking forward.